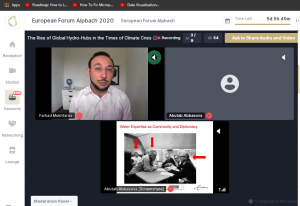 On 29 August, dr. Farhad Mukhtarov delivered a lecture followed by a discussion at the European Forum Alpbach. His lecture, known in the context of the forum as a “working group”, was titled “The Rise of Global Hydro-hubs in the Times of Climate Crisis” and lasted for 1 hour 15 minutes; between 60 and 90 participants attended the lecture with the number growing by the time of the discussion. It was hosted by the Azerbaijani Chapter of the Forum and moderated by Ms. Abutab Abbasova.

Dr. Mukhtarov’s lecture discussed the on-going scramble for new water-related markets among major world powers and implications of fierce competition for such markets. With climate change effects on the rise (e.g. floods, droughts, dam failure, diplomatic problems of trans-boundary water management) and water governance remaining poor in many areas, the demand for water management and governance expertise is on the rise in Global South and Global North alike. This demand offers great business opportunities for engineering/research/consulting organisations around the world. Countries such as US, UK, The Netherlands, China, Singapore and France seek to be seen as Global Hydro-hubs.When profits are high and competition is fierce, branding becomes keyGlobal hydro-hubs are nations and/or cities that brand themselves as centers of excellence in water engineering, management and governance and, by implication, as the natural choice for future clients who need their water-related problems fixed. In the case of the Netherlands, the slogan is “Bring in the Dutch!” repeated across a countless myriad of conferences, trainings, world exhibitions, business meetings, in major press outlets such as New York Times and Guardian and in bi- and multi-lateral governmental meetings. Taking the Dutch Hydr0-hub as an example, dr. Mukhtarov discussed the branding strategy and project activities of various actors within the Dutch Water Sector abroad (e.g. projects in Colombia, Vietnam and Bangladesh). Aggressive branding of the Dutch Hybro-hub is based on the argument that it helps to achieve a “win-win-win”, that is a) help client countries to solve water issues; b) bring profits to the Netherlands; and c) advance the geopolitical stance of the Netherlands as a reliable development partner. In reality, no “win-win-win” is possible and hard choices have to be made. Branding hydro-hubs is a timely and important subject for understanding global water governance and requires more attention from scholars and practitioners alike.

European Forum Alpbach is a networking and learning environment in which speakers from various walks of life gather in the Austrian alpine village of Alpbach together with hundreds of young professionals and students in order to discuss major issues of contemporary times. This year in an entirely digital forum, over 200 speakers from around the world presented in the event that lasted from 23 August to 3 September. Among notable speakers this year were General Secretary of UN Guterres, former General Secretary of UN Ban Ki-Moon, Nobel Prize Laureates Joseph Stliglitz and Muhammad Yunus, and influential thinkers such as Jeffrey Sachs and Ruth Wodak.

Assistant Professor at International Institute of Social Studies (ISS), The Hague, The Netherlands
View all posts by Farhad →
This entry was posted in Education, Policy Translation, Water policy. Bookmark the permalink.