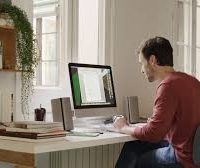 Copyright of the picture: The Economist. You must have heard of the recent ban by ‘Yahoo’ to work from home…Now, as in the picture, workers are chained to their workplace, either they want it or not. I must say, in unison with plethora of evidence from elsewhere, that the ‘presence in the office all week’ policy is out-dated, discouraging and above all — is difficult to defend.

Surprisingly, such a decision comes from a tech giant, Yahoo. Last month, mesmerized by her sharpness and charisma, I watched the podcast of Marissa Mayer from Davos, the new Yahoo CEO. She made an impression as a determined business-lady. But now, reading the news that she supports the policy of ‘no work at home’ makes me wonder. As an article in The Economist put it, “plenty of evidence suggests that letting employees work from home is good for productivity”. Cisco claimed that it saved $277 mission in 2009 just on telecommuting. My own experience from office work tells me that people who just have to be in to the office often spend most of their time on Facebook and YouTube. I personally feel more productive when combine work at home and work in the office.

Forbes’ article is also interesting in that regard. Forbes lists 4 reasons why this is a bad idea. First, they say the best will leave to other jobs that are more convenient, the mediocre will stay, making the company less competitive. Second, less productivity and more stress — sure, if you have to be jammed in trains and be stressed about the right time at work. Third, running higher costs for people and for companies. This stands true also for such places as universities, for example a recent conversation with a friend from a university in The Netherlands made me aware that some charge high prices per year for a computer to be used by a scholar. And last but not least, all these people coming in and out contribute to traffic and air pollution. That may add up to making a significant impact on urban life, the environment and the feeling of welfare.

Yahoo kept silent on the detailed reasons behind the new rule. Today’s edition of New York Times’ reported that the major reasons is to boost the morale of an organization that has been seen as ‘dying’ by many within and outside the organization. At the same time, the managers of Yahoo claimed that this is not a universal, inflexible rule of ‘all time in the office’, Rather, it is targeted against those always working from home, some 200 employees.

It may be good for Yahoo in its situation now, but this is not a general solution to problems with employee morale. Unfortunately, this move may justify others passing the same policy with no good reasons. For example, universities. A policy of ‘must be present’ which contributes to employees’ feeling of lack of authority, independence and which demands compliance with little reasoning behind it, is bound to decrease motivation, productivity and lead to the loss of the top of human capital involved. It does make sense to leave this up to employees to decide how they arrange their working time. I am curious to see the outcomes of the Yahoo experiment.