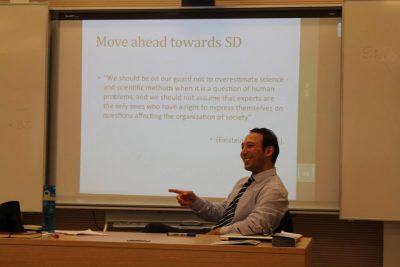 This blog is founded and managed by Dr. Farhad Mukhtarov. Farhad took a Master’s degree in environmental sciences and policy at Central European University and Manchester University (a joint-degree programme administered in Budapest).

In 2005-2009, Farhad conducted his doctoral research on social sciences and public policy at Central European University. In 2007/2008 he was a Chevening Research Fellow at Oxford University, Green College. He worked with various colleagues under supervision of Caroline Sullivan and Edmund Penning-Rowsell (OBE).

In 2010 – 2012, Farhad worked as a senior researcher at IVM, Vrije Universiteit Amsterdam on a project on biodiversity policy and water governance in developing countries, such as Vietnam, South Africa, Costa-Rica and India. Farhad worked with Dave Huitema, Frank Biermann and various junior colleagues.

In 2012-2014, Farhad developed a research line on bio-economy and the plurality of knowledge at Delft University of Technology with the focus on biofuels. He was based at the Department of Biotechnology and the group Biotechnology and Society led by Prof. Patricia Osseweijer. Farhad also worked with Robin Pierce and Martin de Jong at TU Delft.

In 2014-2016, Dr. Mukhtarov has been appointed Assistant Professor of Public Policy at Azerbaijan Diplomatic Academy, Baku, Azerbaijan. Here he introduced the first courses on Sustainable Development and Environmental Politics in Azerbaijan, chaired the Academic Council of ADA University and run various educational committees.

In 2016-2018, Farhad returned to the Netherlands, this time Utrecht University, to work on urban water governance as a senior researcher at Copernicus Institute of Sustainable Development. Farhad worked with Peter Driessen, Carel Dieperink, Stef Koop and various other colleagues while in Utrecht.

Farhad is a chess club player in the first league of the Netherlands (after the master league where professionals play). He is twice junior champion of Azerbaijan (both in 1999 in individual chess and in teams) and five times junior champion of Baku (1997, 1998, 1999, 2001 in classical and 2001 in rapid chess). He enjoys traveling, learning languages (of which he speaks 4 fluently), reading (all kind of stuff), and dancing (Latin dances), not to forget blogging!