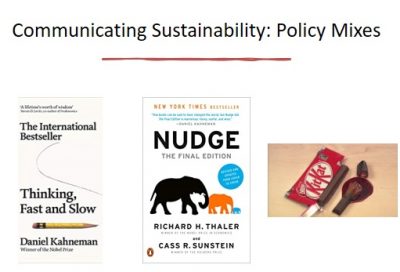 Setting the Stage for Mixes

The picture on the left illustrates two behavioural policy tools. The books by Kahneman, Thaler and Sunstein introduced nudges, discussed in detail below. The picture on the right is a screenshot from an anti-commercial of Kit-Kat by WWF.

In the previous post, we discussed the key debates around Behavioural Public Policy and the Holy Grail of the new emerging consensus: that these tools cannot function on their own and require mixing for any effective policy impact. In the blog post below, I set the stage for the discussion of policy tools and introduce the typology of behavioural and reflective policy tools. In Parts 3 and 4, I will introduce the research question, offer a brief discussion of methodology and results.

Policy mixes have been a major source of research in public policy studies, notably advanced by scholars such as Michael Howlett (one well cited paper is by Howlett and Rayner, 2008). The argument of such scholars is that behavioural tools should be applied together with other policy tools, such as economic, education oriented and command-and-control tools. However, despite the many calls for such practice, little is known about whether behavioural tools are combined for a single or multiple policy objectives, in what sectors and geographical locations such combinations are more common, and what characteristics of policy designs are more or less effective and legitimate.

It is a paradox that the many calls for combined applications of policy tools are unmatched by studies that map such practices.

The paper that I published this year reviews such policy mixes in the field of the environmental policy.

A Typology of Policy Tools: Talking with the Donkey 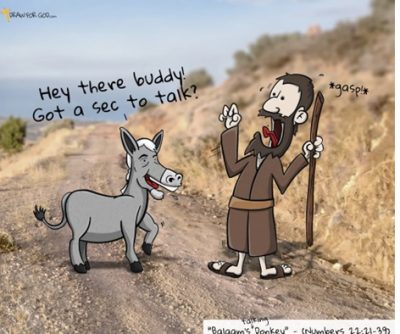 There are different typologies of policy tools, but the lines across which they are distinguished are similar. One popular article that discusses those tools is by Kathryn Harrisson’s in an article from 1999 and titled “Talking with Donkey: Cooperative Approaches to Environmental Protection”. Here Harrisson’s typology is based on Evert Vedung’s earlier work. In this piece, and taking the comparison of policy-making with an attempt to make a donkey do what the owner wants, Harrisson distinguishes the policy tools as follows.

Harrison focuses mostly on talking with the donkey, or collaborative forms of governance, taking various forms and examples of how the government engages with the private sector in order to foster economic growth and environmental agendas. One policy tool that Harrison did not discuss, and as you may have guessed by now, has become very prominent recently — is the behavioural tool of nudging or framing. These are technically not education tools as they are not always information based. These are also not always conscious and consent based tools either — nevertheless, they offer an alternative to economic, regulation and collaborative tools — an important allure of BPP tools.

One key debate in the BPP literature has been about the seemingly manipulative nature of such tools, as they may circumvent consciousness of individuals who act on them without intention to do so. For example, a known example was a painted fly in the urinals that presumably helped men to aim better and hence prevent effort and water to clean the toilets in public spaces, such as airports (Thaler and Sunstein, 2008). Men who have used such urinals may be oblivious to the fact that their behaviour has been nudged. The opponents of BPP tools, as discussed in the previous post, claim that reflective tools are more important as they create a real sense of conscious choices and intentionality — a key ingredient of being a citizen as opposed to being a passive consumer (e.g. see Brulle, 2009).

Given this context, I was intrigued not as much by the very many possible types of policy mixes as in those mixes that brought together both reflective and behavioural tools — that is — both tools that operate at the level of reflection, intentionality and consciousness and those that work at the level of instinctive, habitual or psychologically determined short-cuts/heuristics. In order to clarify the tools, table 1 was drafted below.

Behavioural tools include ‘framing’ and ‘nudging’ and largely rely on automatic cognitive processes, behavioural heuristics and emotional reactions. By contrast, reflective tools rely on analytical and reflective functions of the brain that work to create informed attitudes, preferences and motivations. Framing is defined as “the presentation of a given choice situation where particular attributes are made salient” (Michalek et al. 2015: 141). Messages, visuals, narratives and music communicate through framing. A nudge can be defined as follows,

A nudge is a function of … any attempt at influencing people’s judgment, choice or behaviour in a predictable way (1) that is made possible because of cognitive boundaries, biases, routines and habits in individual and social decision-making posing barriers for people to perform rationally in their own declared self-interests and which (2) works by making use of those boundaries, biases, routines, and habits as integral parts of such attempts (Hansen 2016, 158).

Many scholars of environmental governance claim that democracy and critical reflection are essential for good governance. For the purposes of this review, we distinguish two categories of reflective policy tools: collective deliberation and individual reflection. Deliberation envisages citizens who exchange
views and form reflective and informed policy preferences (Lenzi 2019). Reflective preferences here are the “outcome of a conscious confrontation of one’s own point of view with an opposing point of view, or of the multiplicity of viewpoints that the citizen, upon reflection, is likely to discover within his or her own self” (Offe and Preuss 1991, 170). Individual reflection, also known in BPP as ‘think’, is based on individual reflection without transformative deliberation with others. ‘Think’ may be triggered by making a behavioural pattern visible to an individual, reminding about one’s goals or values, or mindfulness practices that cause reflection and motivate effort to change behaviour. 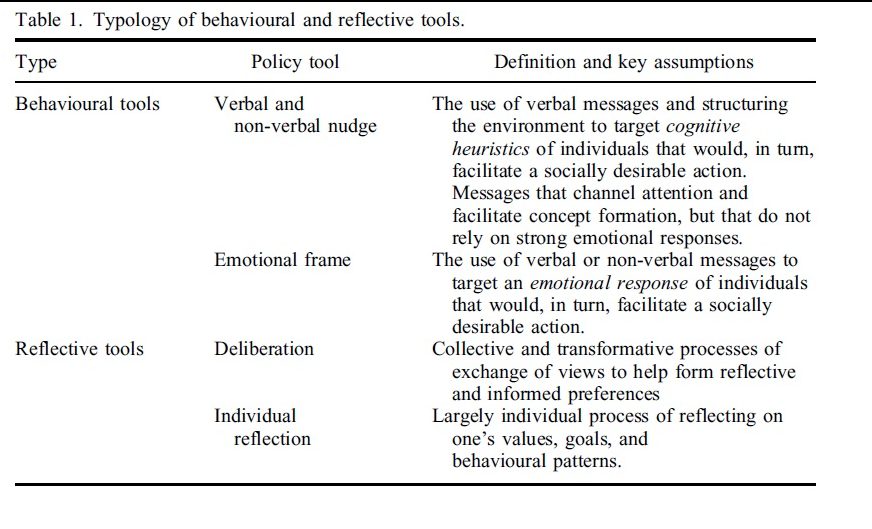 Two following posts will discuss the results of the review exercise including the two research questions that guided it, the methodology and results.