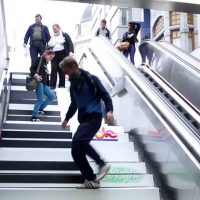 I have been reading and thinking about nudging for over four years now and the debate around it never stops to amaze me. Many of the readers of this blog will be familiar with the well-known book by Thaler and Sunstein released in 2009 and winning Richard Thaler a Nobel prize in economics later (of course the prize was given to his oeuvre not limited to just one book). The wave of behaviouralism, a branch of social sciences mostly rooted in economics and psychology that focuses on human behaviour as not just conditioned by rational thinking, has become only greater in the last years with prominent economists, psychologists and political scientists embracing it. A nudge is a behavioural hint in the form of information, spatial location or timing, that shifts behaviour of individuals towards one that is desired. An important element of a nudge is that is keeps the choice for the individual, being nudged does not mean being forced to choose a particular option. Also, everything that offers an economic incentive for a particular option is not a nudge, a popular mistake made by many commentators, columnists or even scholars who discuss nudging.

Pro-nudge commentators state that nudge is a great innovation as it remains within the remit of libertarian ideology since subjects retain the choice, and it costs very little to implement. What the proponents of a nudge do not explicitly discuss is that environments are not so easily changeable and are not just about the physical context such as the location of a healthy fruit in a shop. There are cultural, emotional and experiential elements to how environments and landscapes function. Furthermore, the same nudges will work differently in different cultures since psychological hints and shortcuts may not be as universal as the proponents of nudging think. There is much of adjusting, pragmatically choosing and deciding what works and what does not in the process of nudging citizens in particular contexts and for particular behaviours.

Anti-nudge commentators tend to see nudges as being a fixed category of tools that engages only (or mostly) subconscious faculties of individuals and that are per se against deliberation. These commentators also disregard the ways in which deliberative strategies (thinking and discussing) can be combined with nudges, or how they can enhance each other. John et al. (2010) provide some examples of how nudges may be employed together with the community-building initiatives, or how nudges may be used to encourage citizens to participate in public life. Also the other way around is possible, that is how communities may get together to decide on particular nudges that would work well in their particular contexts.

We need to move away from the caricatured versions of a nudge and onto a debate that is less polarized and less “universalized” as one debate. These discussions have implications for ideas on deliberative democracy and citizenship, because we discuss here how we as humans decide and act. How this may take place is a subject for more research including experimental work from various areas and geographies.